We are now looking for good photos to put on the Caption Competition page! Please upload the file on the left menu and then add it to the discussion page, or send it to
Error creating thumbnail: Unable to save thumbnail to destination
and we'll add it for you. Please do not directly upload photos to this page as we need to make sure they are suitable first!

Look at the photo, and try to produce a fitting title for it, then write it in the space below with your name (or alias), so you can get the credit! Happy captioning!

Error creating thumbnail: Unable to save thumbnail to destination 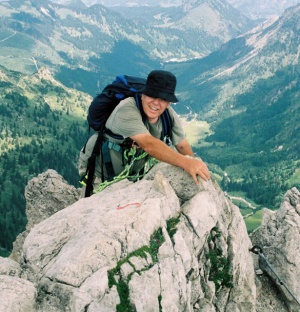 "And with the Ring destroyed within the fires of Mount Doom, Frodo felt relaxed enough to pose for a picture with his hat at a cheeky angle..." - MRW

For once in his life Mr. Gray felt tall. He then felt uncomfortable when he sat on the pointy rock and fell off. - Billybob 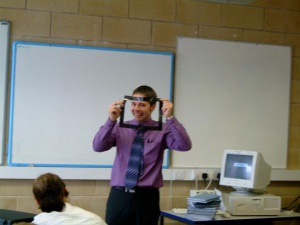 "Mr Spencer was amused for hours by the small rectangle of black plastic. Thinking it was a window, he shouted out of it at some kids playing football near his room and disturbing the lesson" (a memory from my year 12 days) - Chris

"And for my next trick, I'm going to make the border of the 'city' disappear too! Everyone say the magic word; altogether now... Superclastifrageruptic-Diversifification!" - Glabrata

"Mum, look I am on telly" Gordo

"NO, ITS NOT WHAT YOU THINK, IVE BEEN FRAMED! FRAMED I TELL YOU!"mod

The students beg Mr. Spencer to take away the photo as they wish to see the real face of the man who has been teaching them for the past four weeks.Tar7arus 17:30, 7 February 2007 (UTC)

[In Bill Oddie voice] And here we have the native Mr Spencer trying to remake the Canon adverts for television Lamby 19:51, 9 February 2007 (UTC) 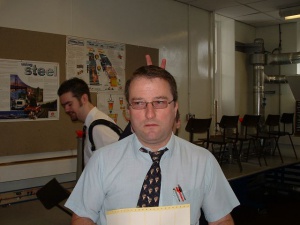 "Mr Elmer sends telepathic messages to Ben to hit the student doing the "bunny ears" over the head with a chair." Sam

"Mr Elmer uses sheets of sticky labels to abduct a student after he commented that Simon's singing was better." David

"Mr Elmer was visualizing the spanking that the boy to his right was going to get for trying to distract him with a mooney. Others took swift advantage stealing school equipment and publicly humiliating the none-to-wise Elmer"

"Mr Elmer knew the culprit was doing the "bunny ears" behind his head, but decided not to get him back until he had a rather heavy guitar handy...." Chris

"Mr Elmer decided not to stand for this disgust of his reputation, donned his cape and mask and set to the streets to react his revenge!" Kronos

"OK, you can stop making fun of my receding hair line now!" Ashley

Woe unto you, O Hiding Student, for the Elmer plans his revenge with Wrath, for he knows he is too short. And let him who hath understanding reckon the number of the revenge, for It's number is six hundred and sixty six" - Revelation of Tar7arus Chapter 13 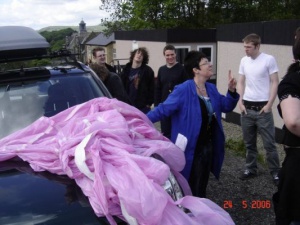 Miss Bowden is unimpressed upon finishing her 20km pink-parachute jump after forgetting to remove the inconveniently placed top-box; thus failing to drop in through the sunroof and make a stylish drive-off exit. Onlooking sixth-formers who were just about to wrap up her car in a similar material look confused and bewildered. - David

"dresses are not to be used to wash cars!"- pauline

"If any of you scruffy waster bums so much as look at my car and its decorative shawl, I'll skin you alive with this finger right here" (Proclaimed the mighty Bowden) - L

"Now you've wrapped them round my car, I will demonstrate how to wrap a burette around your head" - Chris

"Is it any wonder that some car insurance companies don't want to insure me when I've got morons like you vandalising my automobile?!" - Heskey

After auditing Tom Davies for nearly running him over, Miss Bowden finally realises that she was in the wrong, not him!!! - Unknown

"I swear I wasn't drink driving!" - Tom Davies (That was way unfair when she nearly ran me over and gave me an audit)

"As the other students kept her distracted, the Artful Dominic attempted the back-window break-in attempt."- Nick

#4 Mr Reeves and his small drink

"Wow i must be drunk, Mrs Kennedy is hotter than usual!" - unknown

'But in the morning you woke up next to this' -SRN

"The weird thing is, this is actually a Maths lesson..." - Elliot

"Me, the Third Duke of Winchester, working in a 6th Form, with my reputation???" MRW.

"What? I want a little wine with my din dins!" - Heskey

"No, I'll be needing the whole bottle, Mrs Chapman. This next trick's one that Simon Kroll taught me."

"Hi everybody. I'm 'Simon', and I'm a mathematician." - Glabrata

The reality of what he had just done with Mrs Gregson had just set in... 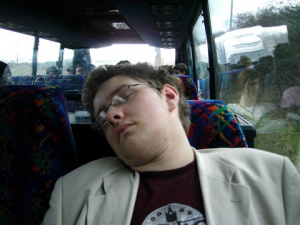 "Surrounded by spectres on a school trip. What a horrible dream!" - Glabrata

"If you look close enough, theres Gerbils hiding up his nose" - Richard Smith

"Unfortunately it wasn't all a dream" - Durham

"Ashworth toys with his opponent by getting him into checkmate whilst asleep!!!! A tactical prodigy, Gareth has been described as Chess' answer to Wayne Rooney." - Alex 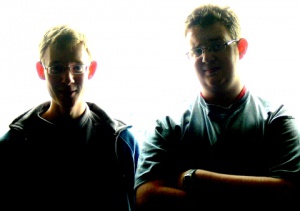 "I once had a near death experience. Never again..." - John Holland

"Will Smith and Tommy Lee Jones let themselves go before the filming of Men In Black III."- Nick

"Who removed Gary Lineker?" - AKIF (glad to have the picture changed)

"Someone took the new england shoot a little too seriously"

"Andrew, my ears are burning, I think that means they're writing captions about us!"- Dominic 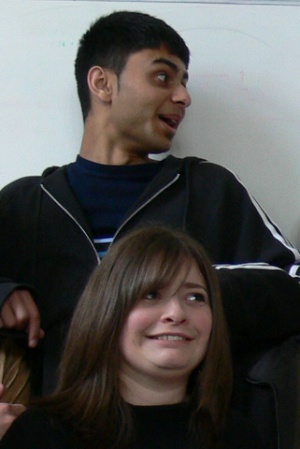 "I swear to God, Akif, that'd better be your hand on the back of my head."- Nick

"He looks like that every time (insert fit girl's name here) walks in the room...ah, teenagers in love :P" - Alex

"Good Lord, check this out guys. I swear that's not natural!" - Milord