Where are you now??

Working in Preston as a site chemist. Previously studied Chemistry at The University of Liverpool for an MChem degree, after leaving BRGS in 2006 following seven long years. Part of 99S. 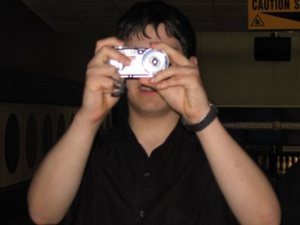 Chris is rarely found outside school without a camera

Any party is soon recorded online, due to a highly technical manoeuvre taking place behind the scenes at "Phoxophrys Photos". A large selection of raw photos are taken; transferred to computer; uploaded or thrown on CD to Dave and therefore consequently uploaded to the above mentioned website. This process can take place in under 30 minutes*.

This process has been discontinued due to the lack of a website. Or any parties.

These are photos of an empty party room, taken from a generally revealing position to illustrate the event's surroundings, as well as providing fodder for Staff Wars should it be needed.

These photos depict the general party atmosphere, allowing viewers to "wish they'd gone" after the event. But obviously, if they hadn't been it was probably due to a lack of an invite, so they probably won't care overly - damn, just completely negated the point of taking them!

Chris contributes a degree of common sense and social aptitude to a group otherwise devoid of such semi-essential skills. He also attempts to add sarcasm and wit, with varying degrees of "success". For example:

Andy: "You know where your friends are when they stab you in the back?"

"I wonder if someone's spontaneously combusted? That'd be cool."

"I'm not moving. No way. They're testing it. I know it's been five minutes and I can smell smoke but I'm comfy."

"There's no better way to kill a book than to write an essay on it."

"Grab me a chair, my knees have gone to death."

(on Mr Ventress) "If he calls me Tweedle-dee one more time I swear I'll shove that book up his.."