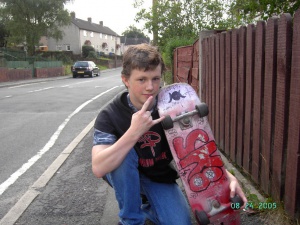 Ashley Phillips was a well known, sometimes popular student in BRGS, now currently in college. He was often considered to be a pest to teachers and Dinner Minions alike, however he is polite and genial with all who are the same with him. He is often found chasing and beating up Zak Richardson, however, they are also seen talking as friends rarely. He can usually be found hanging around the area of the big yellow skip or in the Library, where he acts as an Assistant Librarian.

Was suspended from school in Year 11, for threatening someone with a dart.

Ashley grew up on the medium size council estate called Hall Carr, near the snob estate of Balladen, hence his origins in Balladen Community Primary School. He has grown up from a humble background and struggled his way from disadvantage and made a life for himself in BRGS. He had managed to make friends in almost every year group.

It is disputed whether Ashley is an emo, a punk, a metalhead or for some reason a goth. He is known to be a huge fan of the band 'Dragonforce', previously using a quote from "Through the Fire and Flames" as his MSN Handle, and singing along to the song at random intervals. He is also a fan of punk band the 'Sex Pistols', writing a song in remembrance of Sid Vicious, of emo band 'My Chemical Romance' and goth band 'The Cure'.

Out of school, Ashley is seen in a variety of jeans and shirts, however in school he has become known for wearing his big leather jacket and Limp Bizkit hoody, despite the fact he does not like Limp Bizkit. The reasoning behind this is unclear, but he has changed it for a DragonForce hoody. The leather jacket has not made a similar exchange.

Ashley Phillips came to BRGS in Year 7 with very long hair, which he did not cut until Year 10, when he had it shaved. He then started growing it again and dyed his hair black. He has now dyed his hair blue. Why is unclear. He is thinking of dyeing it red next.

Ashley is often believed to be ninja as he has a cruel efficiency in the way he fights combined with a sadistic pleasure in causing pain or anguish. Ashley also has a dangerous interst in fire and explosives, and has skill in a variety of ninja weapons. Yet despite this edge of sadism, he has a deep spirituality, where he meditates at least half an hour a day to achieve the 7 Point Path of Purity.