One of the most lanky of the 6th formers around, Rob is now a benchmark for appaulingly bad jokes. This is one of the few things that he prides himself on, especially his made-up ones.

Rob Pilling is, in short, a "genius". His ability to come up with a joke (of varying degrees of quality ranging from "gut-wrenchingly hilarious" to "down-right appalling") at short notice is the most famous branch of his ability. He is affectionaly know as a nice fellow, some may say man, due to his friendly mannar and the common means he uses to make new acquaintances (raising his thumb and grinning at said person across a crowded room). Other aliases under which Rob has gone include "Silent Bob", "Well Endowed", "Semi", "Semi MCP", "Rob-and-Pillage" and "Hey Get Your Lanky Self Away From Me".

Also Rob has an infallible ability to sneak into any picture ever taken. Some examples follow. ---> 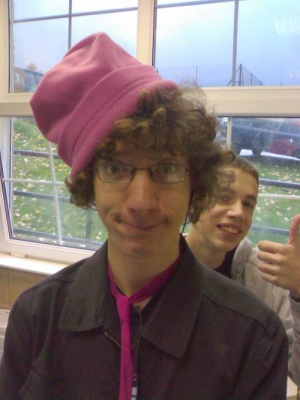 Example 1-Rob tactically interupting a picture of lenny while trying to get his Pink Hat back. 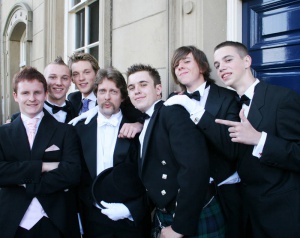 Example 2-Rob at the Leavers Do, displaying his incredibly lanky finger.
File:Rob meets hitler.JPG
Example 3-Rob amazed many when he told of how he had met Hitler (appearently the two never got on well). 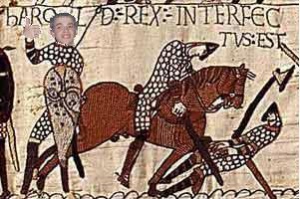 Example 4-Rob Depicted in the Bayeux Tapestry, at the Battle of Hastings, 1066. 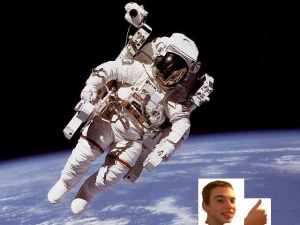 Example 5-Contrary to Popular Belif, Rob Actually Beat Yuri Gagarin in the Space Race.
Error creating thumbnail: Unable to save thumbnail to destination
Example 6-Rob was actually edited out of the final edition of the Mona Lisa, but here is the original, with Rob in it.

Some of the jokes listed bellow are Rob's and he likes them:

(bemused look from all who heard him)

Rob: "Because he was outstanding in his field!"

Rob: "He worked it out with a pencil."

Crowd: "Eeew." (Except a small niche of the lower common room crew who are rolling around on the floor.)

A recent addition to Rob's favourite jokes is:

Small Group of Friends/Sympathisers who remain: "Go on..."

And what is described as a "side splitter" by one Joseph Burrow;

Rob is also a member of the 12DX maths set, and, to the delight of its occupants, has told a joke every single lesson, since the beginning of term, without fail, to the group who sit on the right hand side in Room M2 or whatever its called. Here is a fully compiled list of those jokes. (Except a few which are lost in the mists of time)

Rob: "What do you call a sleeping bull?"

Steven: "I don't know; what do you call a slepping bull?"

Although a joke of Rob's usually genius standard over two years of continuous use of this joke for every Maths lesson the telling of this joke fell to this...

At which point Rob is caught in the midst of an ineffable rage of fury eminating from the enraged Steven Albertson.

(or any random fraction) into a calculator, the calculator replies with the exact same answer

and Rob can be heard "rargh" in his frustration as he attacks the calculator.

Rob goes to school as a happy chappy, as he enjoys all of his subjects.

One of Rob's most legendary tales begins in one maths lesson.

Mrs Gregson: "Do this that and the other for homework."

Rob, clearly misunderstanding The Gregson, accidentally did all of next lesson's work for homework. When he turned up next lesson, and Mrs Gregson set the work, upon discovering that he had already done it all, he skillfully sat there and did nothing, apart from occasionally ask Jonny (Nova): "Did you get 5 for that answer?" or "That was a tough question wasn't it?" to keep up the facade of him doing work. This, in addition to Mrs Gregson's lecturing of Nova about his "slapdash" work, almost killed Joe Burrow, by asphyxiation, as he could not control his laughter.