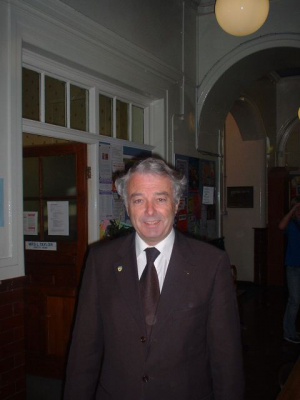 Mr Martyn Morris OBE was somewhat of an unknown quantity, yet it is safe to say that BRGS would not be the institution it is today without the guidance of this great man. He was so much a part of BRGS that Mr Ventress morris-danced to mourn his retirement...

Mr Morris OBE did a lot of behind-the-scenes work for BRGS, providing a large astro-grassy place for sports lessons. As his final legacy, construction of the new Sports Hall began around the time of his retirement, and the recently completed Super Common Room has been named in his honour. Mr Morris was well liked by all students, shown by the massive celebrations as his headship came to an end.

Notably, Morris received an OBE for his services to education under John Major's government

"Thank you staff, will those on the balcony please come down. Thank you school." (at the end of every school assembly ever!)

(while covering 9S Chemistry:) Mr Morris: "So how do we make more bonds?" Raveglia: "We need more women sir!"

"Well done." Usually accompanied by a genial smile and handshake, this was Mr Morris' standard action when handing out prizes in end-of-year assemblies.

While covering Maths - Me: "Can I eat Smarties in class?" Mr Morris: "Only if you give me the blue ones"