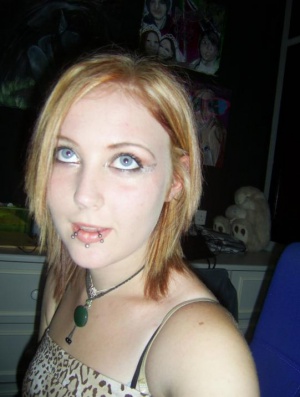 Her parents (mainly her mother) gave birth to their first, and only child, Catherine Charlotte Johnson at Fairfield hospital on the 24th of July 1989 (Do you feel sorry for them yet?) She had lived in Edenfield for all of her, and Kirsty Powell's, life (-"CATT! WHERE HAVE YOU BEEN ALL MY LIFE!?" -"Um...Edenfield?") where she attended Edenfield CofE Primary School before moving on to BRGS with fellow classmates Alex White, Bishop, Emma Ward (who moved to America at the end of year 10), Judd and Kelly. She currently works at the Whitchaff in Rawtenstall as a waitress but prefers KPing as it means she "doesn't have to speak to people" which probably leaves a few of you wondering why she applied for a waitressing job (or five) in the first place.

She can be found usually in the lower common room or at the bottom of the hill having a cigarette (NEVER "fag") when she can no longer stand the LCR. She hates it as more than the Upper, regarding them both to be full of "pretentious idiots who, despite what they may think, are just as bad as each other. It's just upstairs you're more likely to be a narcissistic backstabber and downstairs you're more likely to be an egotistic, arrogant fool who'll tell someone to their face that they hate them before threatening to set them on fire/tell them to go and die" - not out ruling herself. On a good day however she just hates the LCR, especially due to the recent 'war' over the CD player...

Catt genuinely likes approximately 15 people in her year - and only a handful more in the school. Her feelings towards the rest vary from toleration to utter hatred depending on her mood. It's not because she's a horrible person, it's because they're annoying as hell. She also likes to gloat at the fact that since they have moved into year 13 some of her fellow classmates are beginning to understand and agree with what she said all along; that a certain female member of the previous year was not the "ignorant/moody *****" that so many labelled her as, but actually had perfectly good and understandable reasons as to why she pushed them around so much when they were in year 12. For the aforementioned reasons much of Catt's social life takes place outside of the local area, and with different people to those she studies with (she is highly proud of the fact that she has never once set foot in the Rhythm Station - and never plans to) in Manchester or more recently Chester.

Long Haired Lover from (near) Liverpool

Catt's current fancy-man, Dean currently resides down in Chester, but ventures up north now and again to see Catt. In a happy relationship, and said to be a nice guy by some of her Sixth Form friends such as Lotta and Heskey, it's hard to believe the truth, that the foundations of Catt's friendship, and now relationship, with Dean lie upon Dean once passing on the message, "Izzy says go **** yourself with a kitchen knife... preferably serrated". What's more surprising, is Catt and Izzy have also become very good friends, and Catt has been heard on numerous occasions to say "I wish Izzy was my sister".

Living for the Weekend

Or more aptly, nearly dying for it, Catt has, on various occasions, forgone a week with as little food as possible in order to save up her money in order to buy copious amounts of illegal substances to fully enjoy dancing the weekend away at Rockworld. Though she freely admits this is one of the worst places she's ever been, and everyone who goes there supposedly agrees with her, she goes purely to have a laugh with her friends. 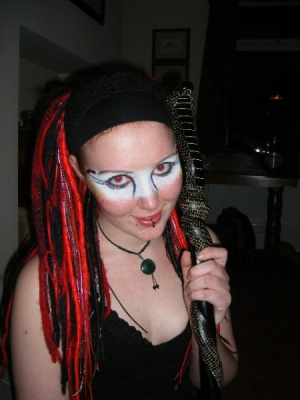 Catt dressed as a parrot. 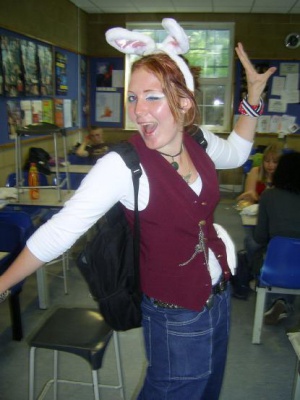 Catt on the last day of Lower Sixth as the White Rabbit from Alice in Wonderland.

In early 2006 Catt found herself reflecting on her life over the past couple of years and her current position. She was sat in the front room of an acquaintance from Rockworld in Sale at a Pirates, Ninjas, Pimps & Whores fancy dress party, dressed as the hostess's parrot, after allegedly spending 2 hours (she's convinced it was half an hour) in the upstairs toilet throwing up due to consumption of over half a litre of vodka in under and hour on top of an empty stomach (only an omelette and an easter egg in two days) and a night out in Jilly's, surrounded by three of her male friends passed out on the sofa dressed as women, remembering that this was ALL because 18 months earlier she had become friends with someone she met of the internet and, quite understandably thinking, "What the ****!?"

She was also seen around college dressed as the White Rabbit on the day of her last theatre studies lesson, and Mrs Fowler-Gibbs last day, when her entire set had a fancy dress party, complete with bobbing for apples and musical chairs.