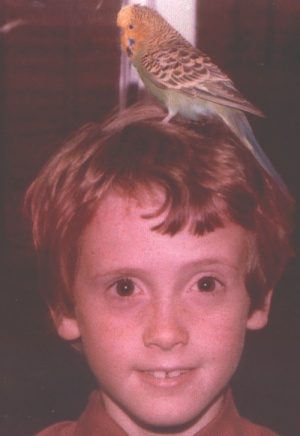 Dr Ellis appeared in a L6 Christmas Quiz in the "Teacher Baby Photos" round. Incidentally, his team won the quiz, and he was presented his certificate in a year 7 year assembly, so he could be applauded by his form. Stage fright kicked in, somewhat.

More commonly known as Trellis, Drellis ... or Dr "Love Doctor" Ellis. Is famous for his ability to understand the need for colouring in activities and his knowledge of Korfball.

Dr Ellis is also the number one authority in the country on the structure and mechanisms of whelk hearts. If you have any queries about whelk hearts or whelks in general, you know where to turn!

Embarrassingly beaten in an arm wrestle by a year 7 girl in the good old year of 2003. He will often ask you to sort out your uniform and then chase after you to see if you've done it!

He was seen in asda with Ms Dougherty.

Has now left the school, to go work at Clitheroe Royal grammar school...

Student: "Why would you want to milk a shrew?"

Dr Ellis: (like it is the most obvious thing in the world) "To get shrew milk!"

Dr Ellis: "I don't know, but they both involve dogs"

Student: "Why do you call them Bob, Sir?"

Dr Ellis: (again, like it is the most obvious thing in the world) "Because that's what they call each other." (opens mouth like fish) "Bob Bob Bob."

How to draw sheep